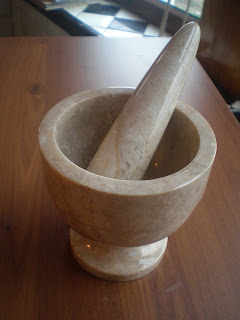 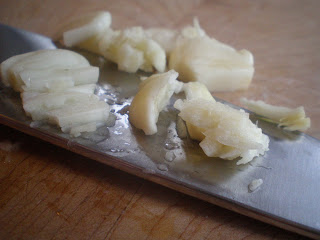 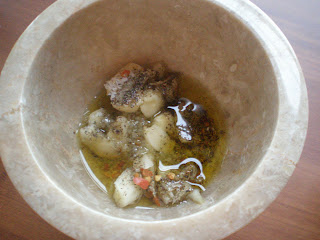 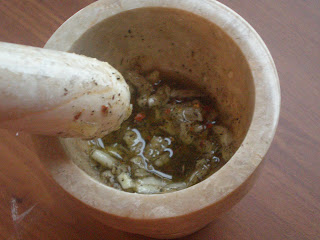 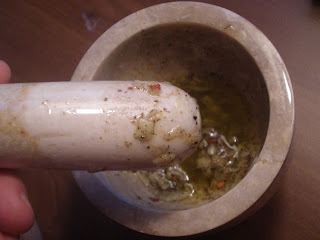 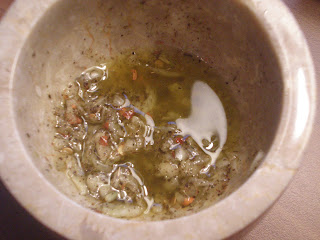 -- Toothpaste for Dinner
Posted by The Eater at 6:11 PM No comments:

I admit to having a preconceived notion of what Murdoch Perk might be. I mean, come on. A coffee place in South City with a name not even cleverly stolen from a sitcom? Jeez, at least Central Perk made sense. Murdoch Perk doesn't mean much of anything.

But they do serve breakfast, lunch, and coffee, and they have outside tables. I cannot be held responsible for the places I go when the weather is nice.

Speaking of nice weather, I'll say that Murdoch Perk does have a nice patio. It's accessible from outside the building and from inside the store, and much like the side, it's simple, comfortable, and pretty. Each table has an umbrella, and if you can't manage stairs, you can always camp out on the small deck.

Murdoch Perk is sort of a coffee place/restaurant hybrid. You order at the counter, receive a tiny number card on a metal stand, and take your seat. The employees bring your food to your table, so you can claim an outside table without worrying about when to run back inside for your food.

The menu itself is understandably limited. Pastries, crepes (sweet and savory), sandwiches, salads, and coffee drinks that are recognizable but not pointlessly ambitious (do we really need more made-up words ending in "-ccino?"). Two large soft drinks, two side salads, and two sandwiches set us back about $22.00. 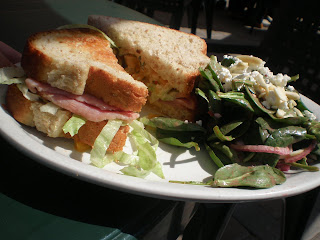 It only took about five minutes to receive our food, which (much like Macklind Avenue Deli, about 10 steps down the street) was thankfully served on real plates with actual cutlery. My sandwich, Hawaiian Ham with lettuce, pineapple-mango salsa and teriyaki mayonnaise, was served alongside the spinach salad with red onions, goat cheese, toasted almonds, and a raspberry vinaigrette. 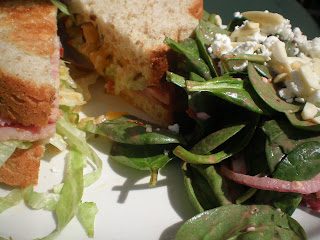 It's not a good sign when your salad is better than your sandwich.

To be positive, let's start with the salad. Because I laugh in the face of e. coli (and haven't eaten a vegetable for probably two days), I ordered the spinach salad. Another bonus was the goat cheese, which I could probably eat from a trough every single day for the rest of my life. This salad was topped with creamy goat cheese crumbles, not the dry, pebbly industrial stuff the Schnuck's in Hampton Village seems so fond of selling. The cheese also provided a textural counterpoint to the crunchy almonds and onions, and it's pungency was balanced by the sweetness of the vinaigrette.

Okay, I'm done being positive. It hurts my teeth. Onto the sandwich....

I've got nothing against messy sandwiches. In fact, I usually prefer them. But when your sandwich is falling apart on your plate before you've even touched it, perhaps there's a tad too much liquid involved. This suspicion was confirmed when I attempted to lift up half of the sandwich. Fail. Sweet, orange-ish juice from the salsa had already pooled at the bottom of the plate, soaking most of the bread into mush.

The ham itself was moist enough, veined with soft fat without being greasy or gristly. It was missing some salt, though, and almost totally overpowered by the pineapple-mango salsa.

It was allegedly made with pineapple, mango, and red peppers, but with the exception of a few pulpy sections in my teeth, I didn't see or taste much pineapple. The peppers tasted like...well, they tasted like nothing, which makes me think they were Cuisinart-ed from a jar. The mango was most prevalent, and it's syrupy sweetness was so cloying that I have no problem assuming it all came from the same fruit cup.

The teriyaki should have provided a salty/sweet note to the ham, but I honestly couldn't detect any of it in the glop of mayonnaise (more unnecessary wetness, and yes, that sort of thing can exist).

If I had made the sandwich, I would have kept the lightly-toasted, multigrain bread. That was good, and the crusts had been mercifully saved from the fruit juice on my plate. I'd have included more pineapple in the salsa, less mango, and chosen fresh cilantro instead of the wilted, soaked leaves slimily clinging to the fruit I ate. I also would have drained it before serving, and maybe dressed it up with a hit of serrano.

I'll be back to Murdoch Perk someday for the Kaldi's and the patio. Instead of eating there, though, I'll stick with Macklind Avenue Deli.