I'm not so much concerned with living in the hippest of places, so the martini bars and vodka lounges that do so well on South Grand and in the Central West End aren't what impress me. However, I'm always excited about new businesses in South City, and I'm especially glad when they do well. With this in mind, I stopped by Three Monkeys on Saturday night.

I got there around 7:30 and the place was packed. I was sort of taken aback by this, because I've been to Tin Can (right across the street) and Tower Pub (a few blocks up the street), and neither of them had ever been this busy so early on a Saturday night. When I walked in and looked at the majority of the customers, it made sense. The clientele of Three Monkeys seems to be mostly 35-60, heavier on the -60 portion.

(This was surprising, because I first heard about Three Monkeys from some 20-something friends, one of whom spends money on his Air Jordan collection and the other with impeccable taste in modern furniture. Maybe more people my age do go to Three Monkeys, just not at 7:30 on a Saturday night.) 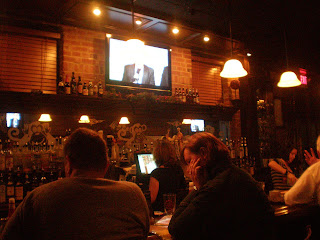 Although the wait for one of the seven tables was 45 minutes, Three Monkeys does have a gorgeous bar and a friendly staff, one member of which was the hostess who didn't even blink when "Fuck" was my response to the wait time. (I later apologized.) There's also an excellent draught beer selection featuring the standard Schlafly line (Hefeweizen, Pale Ale, APA, and the seasonal ESB) as well as harder-to-find selections like Delirium Tremens and Young's Double Chocolate Stout. It was the beer selection and impressive, dark wooden arches that made the wait bearable.

Standing around for about an hour (45 minute waits are highly subjective when a group of 50-somethings refuses to get up after they've been finished for 30 minutes) makes you hungry, so we each decided on appetizers. Jungle Love is Three Monkeys' name for nachos with "fire-roasted" ships, beef, pulled bbq pork, lettuce, tomato, onion, olives, jalapenos, and cheese. 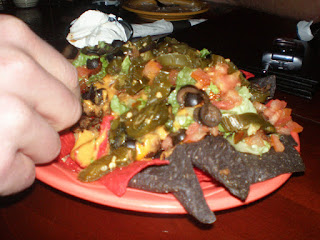 Nice concept for people who have been drinking beer for an hour, but more pulled bbq pork and chips that don't taste like sawdust might be nice. I will say that the jalapenos were especially potent, though, and that I really don't know why I expect so much from nachos.

I was given free reign over the pizza selection. This is why we came to Three Monkeys in the first place. I'd been told that their wood-fired pizzas were awesome, and my friends who had the Seafood Pizza (crab, shrimp, crawfish, calamari) were very happy. Seafood is all well and good, but I'm still a carnivore at heart. With this in mind, I decided to choose my pizza (12.95 for a 16", $1.75 extra for each topping). I picked andouille and crawfish. 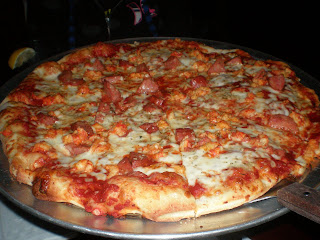 Our pizza took awhile to arrive, and our server explained that someone in the kitchen had dropped a slice. When it did get to our table, it seemed like the resulting rush on our order might have been responsible for the soft and wimpy center of the crust. That says a lot, because these are New York-style pizzas and are best eaten folded over. LOTS of soft, wimpy crust to deal with. The crawfish was fine (not fishy), but the andouille was so bland that I thought it might be Eckrich smoked sausage.

(At least it wasn't a provel-and-Saltine St. Louis style pizza.)

Overall, I'd say that Three Monkeys has a beautiful bar, a friendly and genuinely happy staff, but that their menu selections are a bit too stuck in the bar food category to make me want to eat there again.
Posted by The Eater at 10:39 PM

Didn't the Post Dispatch just review this place? The name and the nachos ring a bell. Sounds like we will skip this place!