Iron Barley is one of those places everyone has heard about but will get around to visiting "one of these days." Well, "one of these days" is becoming less and less of an excuse, especially when you hear that it's been in the same unassuming location at Bates and Virginia for five years now.

Although it's hard to find someone who's been there, this disappears once you walk through the door. Once in, you find yourself looking into the faces of relaxed regulars who could probably amble back to the nearly open kitchen and dip a pinkie finger into the sauce. Just for a taste. The staff at Iron Barley could either crack the interloper over the head with a frying pan or just tell them to grab a spoon. It's hard to tell, because they look perfectly capable of both.

That's the thing about Iron Barley. What would seem odd in most places isn't here, and it's those kind of either/or paradoxes that are satisfying, well, either way.

A 20-minute wait in a place with no more than 15 tables might seem claustrophobic were it not for the genuinely welcoming atmosphere. Iron Barley's rough-hewn bar, strange collection of bric-a-brac, and well-edited beer selection make waiting a pleasant stopover to the eventual meal. The taps of Schlafly, O'Fallon, New Belgium, Goose Island, and the single A-B beer (Bare Knuckle Stout) were front-and-center, but the bottled menu on each table was nowhere to be found near our stools.

Like the bartender, our server embodied the apparent spirit of Iron Barley: casual, friendly, and humble. If you're looking for cleavage or giggles over light beer, this is not the place for you. Our server was able to speak like the very accommodating owner of a house we happened to stumble into after smelling good food from the street.

She also rattled off the specials menu without pause, no small feat considering it seemed as long as the regular menu. Iron Barley's standard appetizer list isn't too varied; there are only two options, and both are shellfish. I've no problem with BBQ shrimp or mussels with tomato cream sauce, butI was discouraged by the lack of effort on paper.

Part of the specials menu, a crab cake appetizer with roasted pepper sauce and field greens, arrived only about five minutes after we'd ordered it (a bonus, as we were now in the middle of our second round). A single cake, it was dense without being loaded with soggy bread crumbs and mayonnaise typical of most Midwestern crab cakes. I would have preferred more lump crab, but the meaty flavor and fiery bell pepper-and-chili sauce were well-balanced with the silky texture, cool greens, and crisp breading. 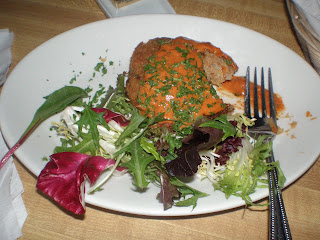 The entree menu at Iron Barley is longer than the appetizer list and predictably straightforward for a South City joint. Perhaps too straightforward. There are no descriptions, so I had no idea that my Oak Roasted Pork "Pruner" (an already large portion that I assume is even smaller than the more expensive "Lumberjack" option) came resting on a toothy red wine-barley risotto with mushrooms. This wasn't explained by the server, either, which I found odd. The risotto went beautifully with the smoky, sweet, and tender pork. Why not say something about it? 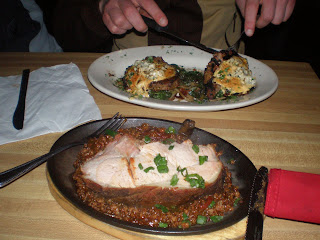 Our other entree was chosen from the much more descriptive specials menu - Beef Tenderloin Medallions with Spinach, Bearnaise, and Roasted Bleu Cheese. Our server pointed out that another version is listed on the menu as "Tenderloin of Beef Pepper Steak," but true to specials form, a few tweaks created a different dish every night.

I'm not sure if I have a talent for ordering the best thing on the menu, but the beef entree was excellent. It's a classic dish, really, when you consider that Entrecote Bearnaise with Creamed Spinach is a warhorse of old-school steakhouses. Iron Barley's version is simpler. The spinach is flash-sauteed with butter and soft onions and serves as a bed for the tenderloin slices. The bearnaise is covered with bleu cheese, which is the passed under a broiler instead of the more menu-friendly term "roasted."

Bearnaise is an overlooked sauce in most home kitchens and, increasingly, in restaurants. Few people understand how perfectly it complements something with little inherent flavor like beef tenderloin. Iron Barley uses an old sauce in a smart, modern fashion. Instead of being used to drown the tenderloin, the bearnaise lends moisture without ever taking away from the ideal char of the meat.

Deconstruction is fun, but only when a restaurant doesn't talk about. And Iron Barley doesn't.
Posted by The Eater at 7:18 PM