DOUBLE POST! The Trade *and* The Fashionability of Bacon 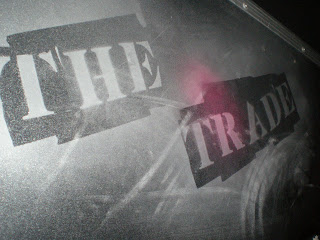 No Douchebags Allowed
It's not on the door of The Trade, but it certainly should be. The Trade isn't the sort of place that accepts douchebags, even the kind that wears a popped collar and keeps its mouth shut. That's not to say it's hard to get in; although the RFT has named The Trade as St. Louis' new rock n' roll bar (perhaps the hammered-together look or poster of Sid Vicious have something to do with it), it's more like a place that accepts anyone who can put their head down, their elbows out, and drink like, well, okay, a rock star.

Finding The Trade takes some doing. It's officially listed at 3515 Chouteau -- the same building currently housing longtime gay bar The Complex. However, it's best to enter from Papin, one block north of Chouteau and home to not much more than industrial buildings and gravel parking lots.

It's called setting the mood.

The Trade doesn't feature rock bands per se. It's simply too small. In addition, the concrete, diamond-plate steel, and haphazardly assembled everything else don't exactly make for ideal acoustics, either. Instead of the thrash bands you'd expect to play under the aforementioned Sid Vicious poster, The Trade plans on hosting a few acoustic acts and DJs and advertising for other local bands for now.

While live music isn't the main draw, the the staff's iPod tastes and drink specials are definitely selling points. Cans of PBR are $1.50 all day every day, High Life specials are $2.50 and under, and the 3 o'clock license is a big boost to an area with not much more than college bars and gay bars (and let's be honest, neither is known for great music).

*
***
*****
***
*
I've made no secret of my hedonistic love for bacon. The texture, the flavor, the aroma, and the fact that it has felled many a vegetarian engender within me a fetishistic desire that has a tendency to disturb others, especially when chocolate is also involved.

Anyway, Salon reports that in addition to stimulating the appetites of food lovers everywhere, it appears as though bacon is making delicious, chewy waves in the fashion world, as well. I bought my friend bacon Band-Aids a few years ago, but I don't think even I could have predicted the below bacon-printed (and scented!) tuxedo. 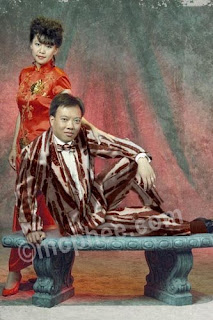