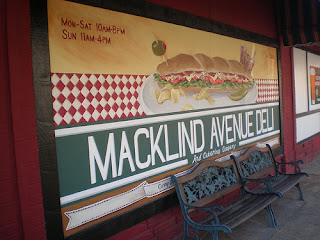 Macklind Avenue Deli
4721 Macklind Ave.
St. Louis, MO 63109
(314) 481-2435
Right now, St. Louis is in the middle of that maybe-a-month-long-but-certainly-nothing-more-than-that time of perfect weather. The humidity that makes our lungs feel like soaked sponges is gone, the damp chill of October hasn't set in just yet, and even in the middle of the day, conditions are just right for eating outside.
This past Friday, Graham and I went to the Macklind Avenue Deli at Macklind and Murdoch in South City (get used to this area, as I dislike driving long distances when I'm already hungry). I remember the place as being called Krekeler's, a kind of corner store across the street from a portrait studio my mom took us to. Within the past year, it has been transformed from a corner store to a full-fledged deli with a bitchin' beer (domestics, imports, micros and plenty of Bud products if you care) and wine selection. While Krekeler's had not much besides a bike rack in the past, Macklind Avenue Deli has a cute outdoor seating area with umbrellas and wireless.
Macklind Avenue Deli has chips, snacks, ice cream, desserts, and sides like slaw and potato salad, but we stuck with the sandwiches and beer. I only mildly regret this; although I was full from one half of the sandwich, I really wanted to try the mustard seed-studded potato salad that looked nothing like the demon-yellow mayo (alleged mustard, LIES!) sludge you're used to buying at Schnuck's. Another thing I mildly regret is only getting one beer apiece. Yes, we had to work later, but Macklind Avenue Deli has three kinds of beer on the shelves -- room temperature, refrigerated 6-packs, and refrigerated single bottles.
The staff looks like former cafeteria ladies who could smack the crap out of you, but instead choose to smile and get the massive sandwiches ready within a few minutes. I ordered the Southwest Turkey sandwich, with pepper jack cheese, Boar's Head Sausalito turkey breast, lettuce, red onion, tomato, and chipotle sauce on floured ciabatta bread (no tomato for me, though). Graham got the Carl's Poor Boy (not a Po' Boy, though, more like a King of the Hill). Two sandwiches, a St. Peter's IPA and a Blue Paddle totaled about $19.00, which is no more than what you'd pay at Bread Co.
My sandwich ROCKED BALLZ.
I'm so glad I got over that not liking spicy foods thing, because Macklind Avenue Deli's creamy chipotle sauce was hot enough to make my lips tingle a bit, but not so hot that it overpowered the seasoned turkey breast and standard shredded lettuce. I'm also glad I got over the whole hating onions thing, because the ones on my sandwich were crisp and piquant (haha, yeah, it's a food blog now). This sounds like I'm reaching, but I'm the daughter of a produce man and I hate -- I HATE -- when simple things like sandwich veggies get overlooked. The chewy ciabatta bread provided a very decent counterpoint for the hotter bites and held up well to the thick layer of pepper jack. 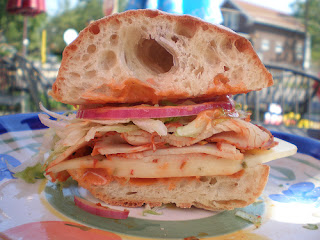 Graham's sandwich was all right, but the bland dressing could have been made with a little more vinegar. A touch of acidity works wonders on a heavy on the meat/heavy on the cheese sandwich, and I don't think the tomato he left out would have stood up very well.
There's a dessert counter, too, and unfortunately, I was too full to partake (though I was interested in the chocolate zucchini cake, an example of one of the only times vegetables and chocolate are permitted to be together ever). Graham got a lemon "tart" before we left, and I place that in quotations because it wasn't very tart at all. Cloyingly sweet with a crumble crust and confectioner's sugar on top, if I'm going to eat something that sweet, I prefer that it contain chocolate and cleverly-disguised illegal substances. I kid, I kid.
As you can see from the photo at the top, Macklind Avenue Deli is open until 8pm on weeknights, but not shown is that the patio doesn't close until ten. The whole place closes up at 4pm on Sundays. Remember, you're still on the South Side, and most of these people still make dinner by 5pm.
Posted by The Eater at 11:49 AM

Yay for someone being honest about the local food and also rooting for the locals; I live near the Macklind Deli and it rocks.
I'm just glad someone else thinks Ted Drewes isn't the best ever... :gasp:.