The above image was taken from the Taste of St. Louis Web site because I was too hungover to remember to take more than one picture of the event. So it goes.

Last year at Taste of St. Louis, some of the booths left me wondering why some crews had chosen to feature a food that was better prepared from an in-house kitchen, rather than the weak burners and steam baths of an outdoor festival. Well, Self, thanks for opening your big fat mouth. Gone were the spring rolls and rock shrimp beignets of 2006. This year, nearly every booth on Macy's Restaurant Row seemed to say "To hell with it, let's just grill some meat."

We started out with the steak empanadas with red pepper coulis from Minions. It was probably not such a bad thing that the advertised basil aioli accompaniment was MIA, as I have issues with mayonnaise-based sauces kept in 90 degree weather. The fried, greasy meat-filled empanadas would be a spectacular drunk food, far better than the oil envelopes (sorry, I meant Jack N' The Box tacos) my friends seem to prefer, especially with sweet, red pepper puree substituting for buttermilk ranch dressing. But that's the problem -- as alcohol sponges, the empanadas are great. As hangover recovery food, they're just a step above pizza rolls.

Thankfully, Mirasol's booth wasn't far away from Minions', and they were offering savory duck and pork meatballs called albondigas . The dour little goth girl at the register called them ale-bone-DAY-goes, but I'm not one to quibble over semantics when I'm hungry. For $6.00, we were handed a small bowl filled with four 2-bite meatballs drowning in an ocher-red sauce. Drunk, hungover, or sober, this is what I like. Meatballs made with rich duck, chewy pork, and visible chunks of garlic, spurting clear juice with each bite and dripping with sauce. (Sounds sexy, maybe I should author me some erotica.) Eating them was tricky, but I long ago mastered the art of leaning face forward, clothing back, fork in mouth with elbow bent perpendicular from body. This is a valuable skill to have when single and eating over the kitchen sink.

The sauce for the meatballs wasn't like marinara, and it didn't carry the chili wallop I was counting on from a "Nuevo Latino" restaurant. Instead, it was more like tikka masala, a type of Indian gravy flavored with almond paste, cinnamon, cardamom, clove, tomatoes, and onion. I checked Mirasol's menu this morning, and saw that their sauce is made with cashews and ponca chili. If I were to make it myself, I might try poblanos for a smoky, subtle heat.

Lest you foolishly assume from the first paragraph that I've got something against grilled meat, our next stop was Roxane's booth for smoked pulled chicken. The people staffing this booth were some of the friendliest at Taste of St. Louis (unless you count L'Ecole Culinaire students, but they simply haven't worked the line for long enough yet). A perky woman informed us that they had just run out of the pulled chicken, but we could have pulled pork if we wanted it. We did, in addition to some jerk chicken wings. 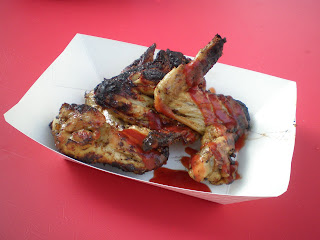 The chicken wings were excellent; giant specimens with the perfect ratio of char to fatty skin to moist meat. The scotch bonnet jerk seasoning was a gradual, sneaky sort of spice that kept my lips warm but didn't sear my tongue off. There could have been more jerk on the wings, but they'd just come off the grill ands hadn't had the opportunity to rustle around with the excess spice that had fallen to the bottom of the buffet pan.

The pulled pork was another story. The meat was so wet that it was practically whipped, the supermarket bun soggy and cold. The sauce wasn't the Carolina-style mustard sauce you'd expect from pulled meat (like I said, erotica, here I come!). Instead, it had an intense, puckery tang from Roxane's own sauce. An employee explained that it was ketchup mixed with tomato jam.

Taste of St. Louis isn't just about food, though, it's about emerging music (yay for my friends in Ashborne, who opened for Bad Company on Friday night!) and local art. All well and good, but this is a food blog, and kids, no matter what the burnouts who hang out in the alley behind 7-11 say, you really shouldn't eat what comes out of a spray can.