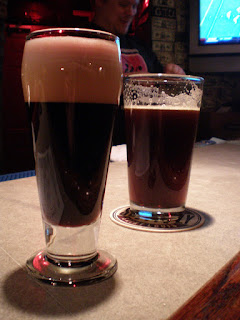 If you're reading my blog, you're probably one of those people who knows what it's like to experience a moment of magic, of serendipity, of honest-to-god PERFECT while sitting on a barstool. One of those "kill me now" moments that doesn't necessarily require ecstasy, but that most certainly involves a sense of knowing that, in at least one place, this one, at this exact moment, right now, things are right with the world. Maybe there's a smooth pint of nut brown ale before you, a bartender generous with the samples and the flattery at the helm, and a purely unobtrusive (seriously) guitarist playing "Mr. Tambourine Man" (again, seriously) in the background.

My moment of goodness came earlier this evening when I decided to take a short trip along the Great River Road to the Rotten Apple Ciderhouse in Grafton, IL. Now, I'm not into antiquing, watching bald eagles, riding ferries, or the other sundry exploits common in historic Illinois river towns. But luckily for me, the enterprising people of ye olde days who decided to eke out an existence on the Mississippi also liked to drink. This is how Main Street establishments like Rotten Apple got their start. Luckily for me, I've got friends who discovered Rotten Apple about a year ago and have been bugging me to visit ever since. 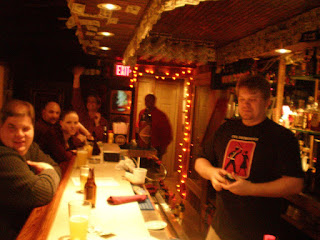 Almost immediately after taking a seat at the bar, I felt comfortable. The bar itself is pretty small, and you feel as though you're in a cabin. I was told that there was a larger restaurant (non-smoking) upstairs, but I don't see the point in drinking if people around you don't get to kill themselves with cigarettes. I immediately noticed that the beer selection at Rotten Apple wasn't typical of the Midwest. Sure, they had Stag on tap, but the bar draught lines also housed Hobgoblin, Founders Centennial IPA, and Avery White Rascal Wit. True to the place's name, there was a cider available, but I'm not in it for the fruit, my friend.

Another thing Rotten Apple has to its credit is Steve, a truly amazing barkeep (bartender is simply not a suitably-fitting term for him). Steve had been described to me as a man who knew almost everything about beer. Normally, people who know almost everything about beer also know everything about being snotty, combative bastards. Have you ever encountered a beer snob? If you think wine snobs are bad, you've no clue. Wine snobs can at least agree with one another every now and then. Beer snobs hate themselves. Anyway, although Steve is very knowledgeable about beer, he's no snob. He's helpful, he's encouraging, and he gets what nearly all other beer snobs don't -- it's beer. It's fun. It's tasty. It's the perfect beverage to enjoy when you're sitting at the bar with your friends. 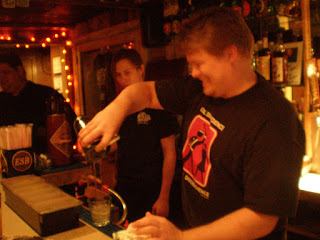 I remarked to Steve that I saw a Hobgoblin tap. He replied that they also had a beer called Big Bad Dog, a nut brown ale brewed by Blue Cat Brewing in Rock Island, IL. The photos here are kind of wonky, but you can see Big Bad Dog in the background of the very first pic up top....it's a warm, mahogany-colored beer that doesn't hit the caramel malt note too heavily, and doesn't kick your tastebuds with hops that don't really belong. And points to Steve for serving it perfectly -- the glass wasn't super-cold, and the head was a glorious 1.5 inches thick.

One of the reasons Steve's an excellent barkeep is because he's generous with the samples. My first sample (provided without asking, prompting, anything besides a hint from one beer lover to another) was Blushing Monk raspberry ale, a Belgian-style beer made by Founders Brewing Company in Grand Rapids, Michigan. 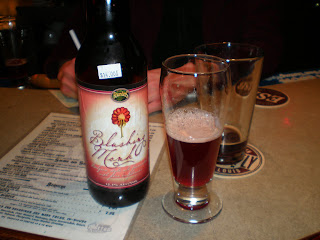 Blushing Monk runs about $15 a bottle, and contains nearly 12.3% alcohol by volume. Unlike many lambics, Blushing Monk doesn't have the puckery wallop of Sweet Tarts, nor does it have a cloying sweetness that makes a person like they're drinking candy. Instead, Blushing Monk is very much a beer, and it's tartness is well-balanced with a sherbet-like nose and a mellow carbonation. The bottle says it's fermented with "pure raspberries," so I can't say if it's brewed with whole fruit or extract. (Which, let's be honest, most beers contain....it's cheaper, it's easily available, and it really doesn't diminish the taste. Another example to try is New Belgium's Frambozen.)

After trying Blushing Monk, I mentioned how I was a huge fan of Young's Double Chocolate Stout. Steve smiled and disappeared into a small back room. He re-emerged with a glass filled with a very dark beer topped with a ruby-and-coffee-colored head. "Is this....." I asked.

Oh god. Ohhhh god. No disrespect to Graham -- my boyfriend whom I love -- but if I were single, a continuous supply of Young's Double Chocolate and Blushing Monk would be enough to make me decide that not having someone to sleep with regularly might not be a terrible thing. It's the alcoholic equivalent to one of my favorite breakfasts of all time (Eggo waffle sandwich made with raspberry jam and Nutella). It is heaven in a glass. 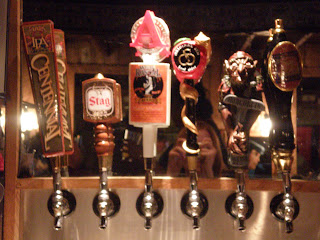 While enjoying a few more Big Bad Dogs, I was encouraged to take a look around. Apparently, in addition to having what I'm convinced (without really investigating, but whatever) is one of the best beer selections in Grafton, Rotten Apple is also the only Grafton bar with a nearly full set of human remains on display. Everyone, meet "Peg, formerly known as Elaine." I have no idea what that means, but she's a great broad: 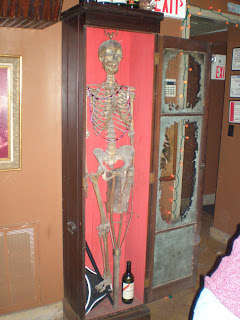 Grafton's a bit of a hike for me, and I was there early enough to desire a bit of sustenance. The menu relies heavily on Cajun-influenced foods, but I wasn't in the mood for anything as heavy as dirty rice, grillades and grits, or etoufee. Brad ordered the jalapeno poppers and was gracious enough to let me try a few. Instead of being the chile relleno-style popper you'd assume they would be, Rotten Apple slices jalapeno peppers thinly, coats them in batter, and fries the quarter-sized disks. The pieces are served with a house-made ranch dressing that reminded me of onion and dill dip whisked with buttermilk.

But I had fried catfish and hush puppies for breakfast (I was hungover and Graham loves the Shrimp Shack), and I didn't want something like jalapeno poppers. On a hint from another barkeep, Claire, I ordered the blackened chicken salad. 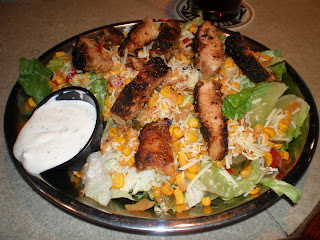 Meh. I wish I could say that Rotten Apple has great food, because that's what I've been told. I'm sure I just ordered the wrong thing. The salad wasn't terrible, but it was pretty heavy on the iceberg (I think I counted three pieces of the advertised romaine) and pretty light on the roasted red peppers (also advertised). I will say that the smoky, peppery chicken was nicely countered by the sweet corn, though I don't know if that was actually roasted, either (um, again, as advertised).

You know -- I'm not too upset. I was at Rotten Apple to drink, not to eat, and the drinking was good. It's an ideal place for beer enthusiasts and Stag fans (or maybe Miller Lite, if you're into that sort of thing), and it's got just enough kitsch to feel welcoming instead of hokey. After you've visited with Peg, formerly known as Elaine, you can check out the velvet Elvis painting and the collection of dollar bills signed by happy patrons. 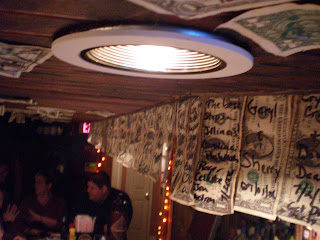 Sign your own. I decided to grab ahold of my own piece of permanent decor during my second glass of Avery Brewing Company's White Rascal Wit. The kiss marks are Kat's, but The Rocket Queen signature is all me. If you'd like to see my contribution, check out the door to the bathrooms. I figured most people would be waiting there, anyway. 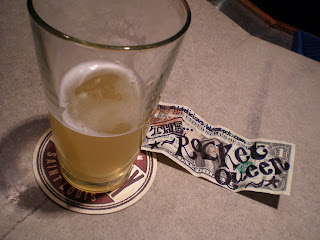 So, beer snobs of the world, relax. Beer is good. So is the Rotten Apple Ciderhouse. Take a hint from Steve and the pleased customer who penned the note below.... 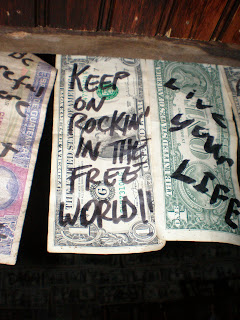