The Best Sandwiches in St. Louis

For the best-looking version of this post (including one containing working links), please visit the MySpace home of STL Delicious. Also featured on that site are answers for Best Gyro (The Gyro Company on Gravois, per Julia Gulia) and Best Veggie Sandwich (Adrianna's on The Hill, per Lizzzzzzzz). Anyway....


After reading a recent New York Times article about the best new sandwiches in New York, I was inspired to write my own list of what I find to be the best sandwiches in St. Louis. I'm not sure how these rank with everyone else; if the RFT's Best Of list has taught me anything, it's that most St. Louisans don't share my tastes. My apologies to Tin Can. I heart your meatloaf but who the hell thinks that's the best mac n' cheese in the city? Cheese don't need sugar, people.

STL Delicious List of the Best Sandwiches in St. Louis
1. Best Overall Sandwich -- Cubano Sandwich at La Tropicana. Pulled pork roasted mojito-style (with rum!), ham, cheese, and pickles on pressed bread. I love pork, cheese, and bread. I hate pickles. But at La Tropicana, I eat the crisp, briny slices anyway. And I like them.

2. Best Burger -- O'Connell's. I've heard they simply throw them in the deep fryer, but I don't care.

3. Best Chicken Sandwich -- Grilled Chicken Breast Sandwich at Square One Brewery. I admire any restaurant that can take something so simple, plain, and often abused and make it downright great. This sandwich comes on chewy ciabatta bread with thick bacon, scallions, a blend of cheeses (don't know which ones, don't care), and the absolute best honey mustard sauce ever. Seriously. It converted my formerly honey mustard-hating friend with a single bite.

4. Best Turkey Sandwich -- Southwest Turkey at Macklind Avenue Deli. Ah, my first ever STL Delicious review and the very first thing I tried on their menu. It still gets my vote for the cool lettuce, fresh red onion, and the addictive chipotle sauce.

5. Best Hot Roast Beef Sandwich -- Mama Toscano's. Despite the wonky hours of this Hill classic (perhaps better known for supplying area restaurants with my nemesis, toasted ravioli), the Hot Roast Beef is a tender wonder that moistens and flavors the bread without drenching it in salty, manufactured broth like you'll find in some other delis.

6. Best Meatball Sub -- Gioia's. It's not only the fat meatballs that make this sandwich great, it's the luscious marinara and the gooey, milky cheese. Extra points for eating it across the street in Berra Park.

7. Best Fish Sandwich -- Grilled Salmon at the Schlafly Tap Room. Simple. Tasty. Not fried (don't get me wrong, I do love me some fish and chips on occasion). Super red pepper sauce. Now, if they'd only put the same amount of energy into running their frequently-down Web site.

8. Best Seafood Sandwich -- (because there's a difference between freshwater fish and food from the sea) Louisiana Crab Cake Sandwich from Sage. You'll read all about it in the review I'm writing this weekend.

9. Best Muffaletta -- Blues City Deli. I'm sure you've seen them near the top of my friends list. Trust me, they wouldn't be there if their sandwiches weren't spectacular. A good portion of my newer friends were culled from their list, too, and I've had more than a few of you write to tell me your favorites on their menu.

10. Best Falafel -- Al-Tarboush. As a sucker for independent, family-owned, dead honest places in St. Louis, I cannot get enough of Al-Tarboush in The Loop. It helps that their falafel is crisp, warm, spicy, cool, and tangy at the same time. It helps that it goes so well with their lemony hummus platter. Lastly, it super helps that the owner is a nice guy who recognizes a girl in need and kindly lifts the "No Public Restroom" rule.

***Yes, I'm aware of the taquerias on Cherokee, but in this blog, tacos aren't sandwiches. Some other time, okay?***

13. Best Breakfast Sandwich -- I'm about to lose any shred of credibility I have and Rooster is way cooler, but I'll always go for Hardee's Bacon Egg and Cheese Biscuit.

14. Best Breakfast Sandwich That Really Isn't a Breakfast Sandwich -- Bacon and Eggs Sandwich at Niche. Damn you, Gerard Craft, damn you for being so good. Congratulations on the Food & Wine Best New Chef nomination and everything, it's just that reservations will be hard to come by now. Just keep on with that so-super-succulent pork belly, okay?

15. Best Banh Mi -- Umm, Banh Mi So. Duh. Another one of those Al-Tarboush-like local suckerpunches to my belly. Banh Mi So is a place I'll probably never review because I love it so much. It's difficult to get me away from the pho, but their banh mi with crunchy veggies, peanuts, and juicy pork on french bread is my second favorite menu item.
16. Best Sandwich I Can't Categorize -- Peppered Pork Sandwich at Iron Barley. Bring a napkin. Better yet, bring eight. 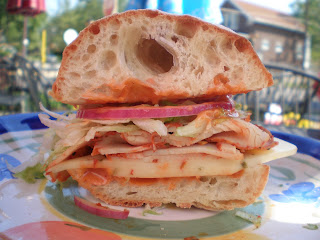