RANT - How Hard Is It To Cook a Hamburger???

And I'll get to that, I will, but first I wanted to say how cool it is that people are commenting. Most have been positive, which is super awesome. One has been cryptic ("Give it a rest," from Anonymous) and one has been critical ("nothing new...used an italian name," from another Anonymous).

I'll deal with the good and the bad, at least I'm being read. But I would also like to remind everyone that I never claimed to be doing or making anything new. Remember, I'm just your average citizen who likes to eat. Most of the people I know are the same way, and I'm not about to spend $40 to cook something fancy at home that people might be afraid to eat (though someday I will take a risk and introduce them to oxtails). But you know, if I can make someone feel more proficient about making some relatively simple pasta, I'm going to. But thanks, Anonymous, for saying you might come back. Welcome in the first place.

It's a Rant because I'm fairly poor right now, at least until my paycheck next week. This issue has been on my mind, anyway, and I really want to know WHY so many restaurants in St. Louis find it impossible to cook a hamburger to order.

Maybe my upbringing screwed me. I was raised in a family of enthusiastic cooks, eaters, and carnivores, so cooking something medium rare to medium was never a mystery. When it came to meat, pink tasted better. Blood meant flavor. Bring on the gore. Unfortunately, 8 out of the 10 times (mostly a guess, I'm really bad at math) I just want a hamburger in a St. Louis establishment and order it medium, I get well done. If I'd wanted gray I would have asked for it, wouldn't I?

This happens everywhere, even the restaurants who are supposed to know what they're doing when it comes to burgers. O'Connell's, Blueberry Hill, McGurk's, Affton Cafe, et al. In fact, the only place that hasn't let me down is Fast Eddie's, but I'm a Southsider and those drunk Sundays with cheap eats don't happen often.

I'd understand the "oversight" if I ordered a burger in a finer place and the cooks wanted to punish me, but jeezus peezus, we're talking pub atmospheres here. The Eater cannot live on french fries and beer alone, no matter how much she would like to.

If anyone knows of a place that honors the tradition of simple, slightly bloody ground beef, let me know. I'll even be happy to drive awhile to get there.

And in case anyone's interested, here's a brief shot from the PETA (people eating tasty animals) party I attended this past weekend. The list of food I had consists of deer stew, red beans and rice with turkey neck bones in the mix, meatballs in simple marinara, crawfish etoufee, bison sausage, and elk burger (cooked perfectly!). Like a champ, yo. 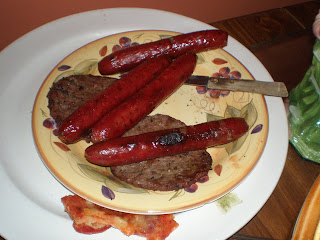