Blah blah blah, The Hill. While many St. Louisans enjoy the bland and boring far at Cunetto's seemingly out of habit, I'll reserve The Hill for delis and make my pasta at home. Here's what I used to make some pasta this weekend.... 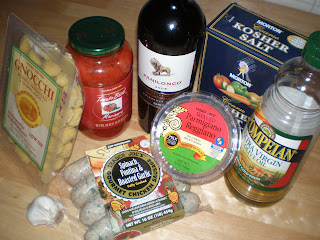 Instead of something typical like spaghetti bolognese (that's spaghetti with meat sauce, by the way), I felt like making some Gnocchi Pomodoro with Salsicce del Pollo and Roasted Garlic (and that's gnocchi with tomato-basil marinara, chicken sausage, and, well, roasted garlic).

Let's start with the sauce.

I'd like to take this opportunity to defend sauce-in-a-jar. First of all, I hate large pieces of tomato. Second, I'm not spending $10.00 on fresh herbs. Lastly, I'm not an Italian grandmother who has all day to spend on Simmer. Thus, Trader Joe's Tomato Basil sauce is about to get an upgrade. 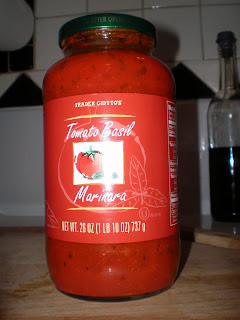 Roasted garlic has a great, mellow flavor that works well in the background of an acidic tomato sauce. Personally, I feel that you can never have enough garlic and rarely enough olive oil, so this steps includes plenty of both.

Take two or three cloves of garlic and peel them. I do this with a blunt object (actually an empty sake bottle). Placing the garlic on the board and thunking it once will break the hard base, which makes the skin crack easily.

Once garlic is peeled, trim the ends and smash the cloves. Smashing is quicker than dicing, plus I get to play with my chef's knife (NEVER a garlic press, which is a tool of the unholy and robs garlic of flavor and aroma). To do this, place cloves on a board and position the flat side of your knife blade over them. Then, press down firmly on the other side of the blade with your hand like you're stamping a paper. See? 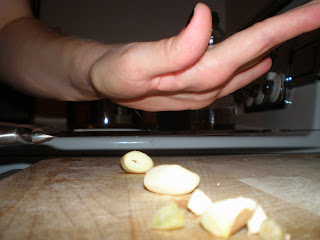 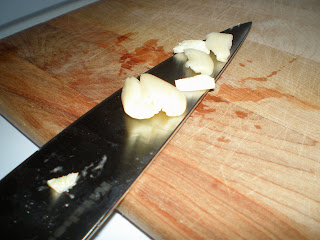 Next, make a small foil packet and cover the bottom with a thin layer of olive oil. Place the smashed garlic inside and keep packet in the oven until the garlic is golden brown and mushy. (Do NOT burn garlic - nasty, nasty, nasty!)

Ina medium saucepan, heat about 1/6 or 1/4 of an inch of olive oil. Keep the burner on Low, because olive oil has a low smoke point. You don't want it to start burning off before you get anything in there.

While the oil heats, prep the sausage. Trader Joe's carries an awesome chicken sausage with spinach and fontina that I could eat hourly if I was allowed. In order to use them in sauce, you first have to remove the casing. With a paring or sharp steak knife, cut a slit lengthwise along the side of the sausage. Pull the casing apart and remove the meat. 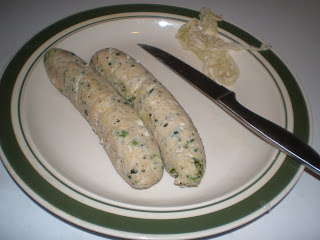 Now that it's all loose and crumbly, break up the sausage into pieces. Drop the pieces into your oiled saucepan like in the blurry picture below. 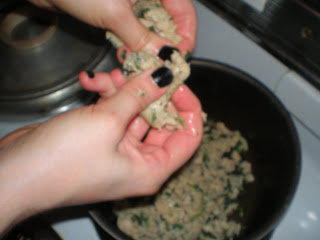 Your heat should be a Medium Low now, and your garlic should be roasted. Add the garlic to the sausage and stir to coat everything in olive oil. 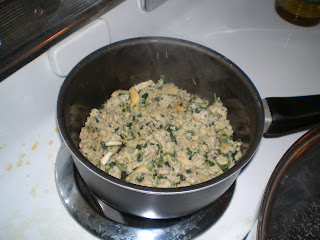 When the sausage is partially browned, add your handy sauce-in-a-jar. Reduce the heat to a simmer. Stir every so often to distribute fat and deliciousness. 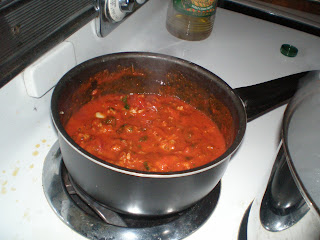 To cook pasta, first you've got to boil some water. Easy, right? You'd think. When you're boiling water for food (as opposed to for sanitation, but I don't live in India...or Festus), there are two things to remember. 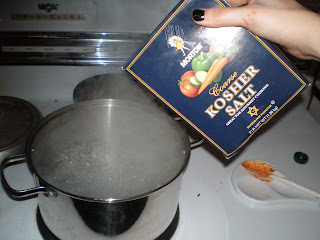 Salt is a big deal. Wars have been fought over it (Solaria, Rosettia, Rome, France, Germany, Spain, even Texas). People don't realize the importance of seasoning in the history of armed conflict. Instead of fighting for the right to drive big-ass SUVs all over the planet, people used to fight for flavor. Saffron (Saffron War, 1374), nutmeg and cloves (Indonesia, 1600's), cinnamon (Java, 1825), and chocolate (Cortes' invasion of Mexico, 1518) sure beat the hell out of gasoline.

Now, Thomas Keller says that boiling water should taste like the Atlantic Ocean. Well, I've tasted the Atlantic Ocean, and not only is it gross, but my house isn't the French Laundry. (Forgive me, Thomas, for I have sinned.) For me, a small palmful of salt is enough.

When I'm cooking pasta, I also like to add a little olive oil to the water. It prevents the pasta from sticking and imparts a little flavor.

Gnocchi is a potato-flour dumpling pasta that looks like tiny loaves of bread. It's chewy, doughy, and fantastic about absorbing sauce. Be careful not to overcook (3 to 4 minutes, tops), because gnocchi can get gummy fast. 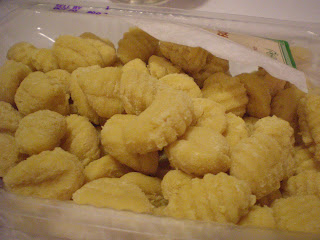 Add gnocchi to your boiling, salted, possibly oiled (according to your preference) water. Step back and admire your culinary prowess. 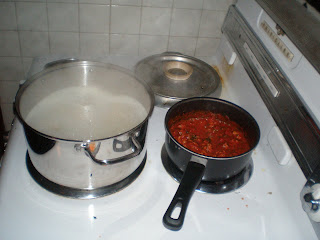 It's been 3 to 4 minutes tops, and your gnocchi's done. Take the pot off the burner and dump into a strainer. Toss the gnocchi a few times to remove excess water. Plate immediately (cold gnocchi gets gummy, too).

Cover THAT with shaved or grated Parmesano-Reggiano. I prefer the pre-deconstructed kind, but that's because I'm a klutz who doesn't trust her fingers near a grater. If you're less of a spaz, feel free to get a wedge and grate it yourself. (But for the love of god, do not ruin everything with Parmesan-in-a-can.)

Look at what you've done. Thank you, thank you. 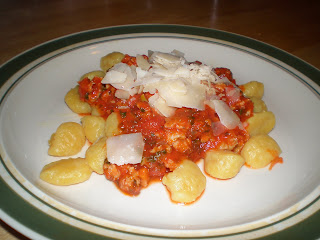 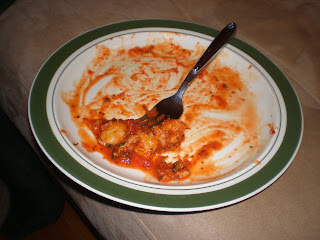 Jesus, girl, I haven't even had breakfast and you've got me jonesin' for dinner and a nice bottle of vino.

Nice work and keep turn those fantastic, sarcastic, caustic phrases that make this so much fun to read.

Came across in a random blog search. Too easy. It's nothing new and certainly not impressive. Sounds like you are trying to spice it up using the italian name for it. Maybe there will be something new if I return.